Power yoga is an intense form of yoga.

Unlike Ashtanga yoga, in strength practice, exercises are performed not in a fixed sequence, but with the same intensity. Power yoga is great for physically fit people who want to increase flexibility and even out muscle imbalances, which are common among athletes. Vigorous change of postures is similar to a dance rhythm and requires a lot of concentration.

Power yoga focuses on the outer side of the Force, revealing the full energy and health of the human body. Physical strength develops through endurance and increased work of the outer shell of a person. At the same time, you get rid of psychological blocks and nervous tension. Going beyond the boundaries of the physical, yoga prepares practitioners for tests and difficult postures, and the need to linger in them for quite significant periods of time. The power of the mind, also brought up by power yoga, teaches you to move away from heavy, unnecessary thoughts, while maintaining concentration.

In addition to physical and moral strength, power yoga is also aimed at finding spiritual strength. Having found it, the practitioner rises above the body and mind and finds harmony.

Power yoga is for those who enjoy exercise. It is for those lovers of intense training who are already in shape and do not want to lose it, devoting most of their time to meditation and slow movements, which are an integral part of classical yoga. Power yoga will be useful for athletes, especially those who are professionally involved in surfing, skiing, running, martial arts, cycling and team sports. However, power yoga involves not only programs for professionals, but also classes for beginners and amateurs with different levels of preparedness and natural flexibility.

Power yoga includes Surya Namaskara (sun salutation postures), which consists of twelve exercises. This complex includes long graceful movements combined with special breathing techniques and muscle tension of the chest, hypochondrium and waist. The change of positions is aimed at developing strength, and also helps to strengthen the spine and remove extra centimeters from the waist. There are many different variations of power yoga that together make for a dynamic and effective workout. 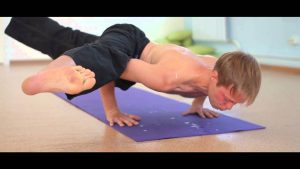 The heartbeat becomes calmer and more even.

Work on correct posture and its preservation is one of the main components of power yoga.

Power yoga improves concentration, which is so necessary for schoolchildren and students.

It is also a great load for athletes whose load is constantly increasing.